Intercostal lung hernias are rare after thoracic surgery. The incidence of post lobectomy lung hernias after thoracoscopic surgery is very rare. Most hernias are found incidentally in follow-up computed tomography (CT) scans and the majority are asymptomatic. Very few cases have been reported in the literature after video assisted thoracoscopic (VATS) lobectomy, to date there has been 11 cases to our knowledge (1). The majority of the reported cases had a right upper lobectomy (2). To our knowledge, there are no cases reported in patients with a history of uniportal thoracoscopic lobectomy with acute presentation and frank hemoptysis (3). Most patients with intercostal lung hernias present with pain at the site or bulge in chest wall. In some instances, the presentation of intercostal hernias can be with acute incarceration with subcutaneous emphysema and increase in pain at the incision site. Frank hemoptysis is a rare presentation for intercostal hernias, only in one previously reported case after thoracoscopic lobectomy, the patient presented with hemosputum (1-3).

In one the largest series of intercostal hernias after thoracoscopic lobectomy, the presentation of all the cases described was several months after the procedure and none of the patients had hemoptysis. We report a unique case of acutely incarcerated lung hernia after uniportal right upper lobectomy that presented with hemoptysis and subcutaneous emphysema in the immediate post-operative period. Acute hemoptysis caused by an acutely incarcerated intercostal hernia after uniportal lobectomy is a very rare presentation (1-3).

The diagnosis of intercostal hernias is suspected by clinical exam when a patient complaints of a bulge in the chest wall during cough and pain at the site (1). In some patients, subcutaneous emphysema is also present, particularly if they are incarcerated. The gold standard to diagnose an intercostal hernia has been CT scan of the chest, as it clearly defines the anatomy and identifies the lung parenchyma herniating through the intercostal space (4). I present the following article in accordance with the CARE reporting checklist (available at http://dx.doi.org/10.21037/asj-21-5).

A 76 y/o male with history of gastric gastrointestinal stromal tumor that was resected in 2016 and subsequently was treated with imatinib for 1 year. He presented for yearly follow-up and was found to have a right upper lobe mass of 2.9 cm on computed tomography of the chest. He then underwent a percutaneous CT guided biopsy and pathology demonstrated adenocarcinoma of the lung. He had no history of smoking and his only other known medical problem was hypertension and bronchial asthma. He underwent preoperative evaluation with transthoracic echocardiogram (TTE) and pulmonary function tests. His TTE demonstrated moderate to severe mitral valve regurgitation with normal ejection fraction (65%) but he was asymptomatic with no activity limitation and required no intervention at the time. His pulmonary function tests demonstrated FEV1 of 2.8 liters and DLCO of 81% with mild obstructive disease with response to bronchodilators suggestive of bronchial asthma. Positron emission tomography demonstrated no signs of mediastinal lymphadenopathy or metastatic disease. He was offered surgical resection after being evaluated by cardiology. He underwent uniportal thoracoscopic right upper lobectomy with mediastinal lymph node dissection using a 4.5 cm incision in the 5th intercostal space. Initially his post-operative course was uncomplicated with a very small expiratory air leak, minimal pain and occasional cough. On postoperative day 2 his cough worsened and he complaint of increased right chest wall pain. He also had a small amount of hemoptysis (approx 5–10 cc) during a cough spell. He was treated with antitussives, bronchodilators, empiric antibiotics and steroids with the presumptive diagnosis of acute bronchitis and pneumonia. His cough improved as well as his pain and his chest X-ray demonstrated small apical pneumothorax and mild subcutaneous emphysema. On post-operative day 4 his subcutaneous emphysema acutely worsened as well as his cough and he had a second episode of hemoptysis but this time approximately 20 mL of bright red blood. He remained stable, with minimal oxygen requirements but his subcutaneous emphysema did not correlate to his small air-leak on his chest tube and worsened despite using suction −20 cm of H2O. A CT angiogram was performed and demonstrated an intercostal hernia with trapped lung and no obvious site or explanation of his hemoptysis (Figure 1). He was taken to the operating room for re operative uniportal VATS. Upon opening his incision a purplish mass was seen in the subcutaneous tissue consistent with incarcerated necrotic lung tissue (Figure 2). The lung tissue was pushed into the chest cavity and the camera inserted. A portion of the right lower lobe had become trapped and incarcerated in the wound and became necrotic. A simple wedge resection of the lung tissue was performed (Video 1). The specimen was opened in the operating room table finding a pneumatocele filled with blood inside (Figure 3), explaining the hemoptysis and the subcutaneous emphysema. The intercostal space was closed with 3 intercostal sutures and the patient had an uneventful recovery afterwards. 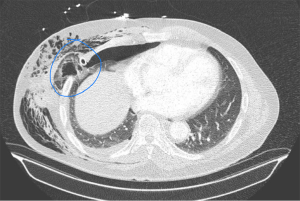 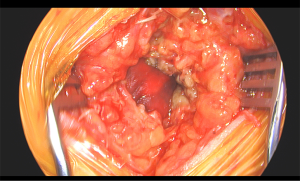 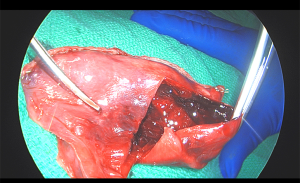 All procedures performed in studies involving human participants were in accordance with the ethical standards of the institutional and/or national research committee(s) and with the Helsinki Declaration (as revised in 2013). Written informed consent was obtained from the patient.

Acute lung hernia and hemoptysis after a lobectomy is a very rare finding, specially in the acute postoperative period. The triad of acute hemoptysis, increased subcutaneous emphysema without significant air leak and cough should be considered all highly suggestive of acute incarcerated intercostal lung hernia. The occurrence of intercostal hernia after VATS or uniportal thoracoscopic surgery is extremely rare (1-3). The largest series reported in the literature has 3 cases only and to date only 8 cases have been reported individually to our knowledge (1). The acute presentation only 4 days after surgery like in our case and the presence of hemoptysis is very rare and we attributed this to the patient cough spells likely from untreated bronchial asthma. We reviewed the literature and could only found one case of hemosputum after VATS lobectomy due to intercostal hernia (2).

Intercostal hernias are usually postoperative at the site of previous access incision but have also been described on patients with acute severe episodes of cough and no previous thoracic surgeries. There are not enough cases in the literature to determine weather intercostal hernias are more common with uniportal VATS compared to multi-portal VATS lobectomies, but it is unlikely that there is a difference in the incidence since most hernias present at the utility incision site (3,4). Curiously, most hernias described after thoracoscopic lobectomies had a right upper lobectomy, which is considered a risk factor (2,5-8). Lung hernias can also occur after open thoracic operations and lobectomies, in some series intercostal hernias have been associated with minimally invasive surgery, where the intercostal incision is longer than the skin incision (9,10). The cause of hemoptysis in our case was a pneumatocele formed in the right lower lobe that was incarcerated and we hypothesize that it was caused by repeated trauma between the ribs due to the cough of the patient.

Hemoptysis in patients after lobectomy is very rare and in patients that are not at risk of bronchovascular fistulas like patients with history of sleeve lobectomies the differential diagnosis is lung ischemia (from incarcerated lung or devascularized lung parenchyma) and/or airway trauma. CT angiogram of the chest and bronchoscopy are important tools to make a prompt diagnosis like in our case (3,4). The treatment for acute incarceration with symptoms is surgical correction, this can be accomplished by closure of the space with intercostal sutures or using mesh to repair the defect (1,2,5-8). We believe our case contributes to the literature to expand the knowledge of potential complications after thoracoscopic surgery and differential diagnosis of post-operative hemoptysis. For patients that present with increase pain at the incision site, subcutaneous emphysema and cough, the clinician should highly suspect an intercostal hernia. Patients with acute hemoptysis after thoracoscopic lobectomy should undergo CT scan of the chest to rule out incarcerated intercostal hernia.

Reporting Checklist: The author has completed the CARE reporting checklist. Available at http://dx.doi.org/10.21037/asj-21-5

Ethical Statement: The author is accountable for all aspects of the work in ensuring that questions related to the accuracy or integrity of any part of the work are appropriately investigated and resolved. All procedures performed in studies involving human participants were in accordance with the ethical standards of the institutional and/or national research committee(s) and with the Helsinki Declaration (as revised in 2013). Written informed consent was obtained from the patient.