Lung cancer is the second most commonly diagnosed cancer worldwide and the leading cause of cancer related mortality (1). Complete resection remains the mainstay of treatment for non-metastatic disease and is important for long term survival. Assessment of hilar and mediastinal lymph nodes at the time of surgical resection has been recognized as a key aspect since the 1950s (2). This practice serves to provides prognostic information and to clear disease harbored within the lymph nodes. Five-year survival decreases significantly as pathologic lymph node (pN) stage increases, from 75% in pN0, to 50% in pN1, 38% in pN2, and 32% in pN3 disease, for patients who have undergone complete resection (3). Clinical staging may underestimate pN status in over 30% of patients, resulting in inadequate adjuvant therapy and decreased survival (4,5). Surgical assessment of intrathoracic lymph node status therefore becomes crucial.

Although the value of lymphadenectomy in lung cancer staging and treatment has been established, specific guidelines as to the number and location of lymph nodes considered to be adequate, vary among societies, institutions, and surgeons. Prior studies have reported wide variability in the number of lymph nodes resected with lung cancer specimen, ranging from 0 to greater than 70 (5-7). Additionally, a large number of lung resections fail to meet any of the proposed criteria for lymph node examination, with up to 60% having no mediastinal lymph node evaluated (5). An article on postmortem examination of mediastinal lymph nodes reported an average of 23 lymph nodes resected, with station 7 being present 100% of the time (8). This leads us to believe that lack of mediastinal lymph nodes as part of lung resection for malignancy is not due to absence of these nodes in the patient. In this article, we review the current guidelines on intrathoracic lymph node assessment for lung cancer resections, examine current practice patterns, report survival differences with varying levels of lymph node dissection, and propose methods to improve quality of lymphadenectomy. We present the following article in accordance with the Narrative Review reporting checklist (available at https://asj.amegroups.com/article/view/10.21037/asj-21-80/rc).

To find relevant articles for the narrative review, the PubMed database was used to search for the following key terms and their combinations: “lymphadenectomy”, “lymph node staging”, “lung cancer”, “NSCLC”, “lung surgery”, “lung resection”, “lobectomy”, “segmentectomy”, “wedge resection”, “quality”, and “extent”. The search was limited to English-language publications. All study design types, and time periods were included. In addition to the search, we also included articles cited by references of the initially retrieved articles. A total of 33 articles were examined, and publication years ranged from 1951 to 2021. Two authors performed the literature review and independently found the data from the selected articles. The search strategy is summarized in Table 1.

Results of the search

Intrathoracic lymph node staging includes assessment of intrapulmonary, hilar, and mediastinal lymph nodes. A guide to nomenclature was first described in 1967 by Tsuguo Naruke and has since evolved to the current map described by the International Association for the Study of Lung Cancer (IASLC) (9,10). Although the need for lymph node evaluation has been well established, specific parameters as to the exact number to be resected remains debatable. Various guidelines have been proposed by the National Comprehensive Cancer Network (NCCN), American College of Surgeons Commission on Cancer (ACS CoC), the Union for International Cancer Control (UICC), American College of Surgeons Oncology Group (ACOSOG), and the IASLC among others (11-15). Recommended guidelines for intrathoracic lymph node assessment are outlined in Table 2. Moreover, inadequate lymph node assessment is now classified by the IASLC as an uncertain resection margin, R0(un).

Although it has been established that adequate lymph node assessment is an essential prognostic indicator, satisfactory evaluation is not consistent among surgeons. In a review of the Surveillance, Epidemiology, and End Results (SEER) Database, including patients from 1998 to 2002 diagnosed with non-small cell lung cancer (NSCLC), inadequate lymph node assessment was found in 62% of patients. In a European study using data from the Spanish Lung Cancer group SCAT trial, specific lymph node stations were considered. Evaluation of stations 7 and 10, with station 7 being mandatory as defined by the IASLC guidelines, were not assessed in 33.7% and 17.7% of patients, respectively (16). Additionally, 15.4% of patients with N1 disease did not have mediastinal lymph nodes removed, and 20.2% only had one N2 station assessed (3 being the minimum as defined by NCCN and IASLC). Consequently, 5-year survival and lung cancer-specific survival rates were decreased in those patients without mediastinal lymph node sampling, compared to those who had mediastinal lymph node sampling (47% vs. 52% and 58% vs. 63% respectively, P<0.001). Examination of mediastinal lymph nodes resulted in a 7% decrease of all-cause mortality and 11% decrease in lung cancer specific mortality (5). A more recent study evaluated patients in the National Registry of Lung Cancer (Poland) between 2007 and 2017, and found 82.7% to be compliant with UICC staging criteria for lymph node evaluation (17). Furthermore, adequacy of staging improved by 16% from 2008 to 2010, suggesting greater compliance with guidelines as awareness increases. Factors reported to be associated with a decrease in adequacy of sampling included older patients (age >64), left sided tumors, sublobar resections, and stage T1 tumors (17). Survival was once again demonstrated to be significantly worse in patients with inadequate lymph node assessment (17). Similarly, David et al. studied the California Cancer Registry from 2004 to 2011, assessing lymph node patterns and effects on survival (18). This data corroborated the negative effect of inadequate lymph node assessment, reporting 5-year overall survival of 42.6% for zero resected nodes vs. 54.6% for more than 10 resected nodes. Once again, patients with sublobar resections were less likely to undergo adequate lymph node examination (18).

With more pervasive use of low dose computed tomography (CT) for lung cancer screening, there has an increase in detection of early-stage tumors smaller than 1–2 cm and correspondingly an increase in sublobar resections, namely anatomical segmentectomies (19). Several studies using national databases have shown sublobar resections to be associated with lesser lymph nodes resected with 40–70% of patient with no lymph node sampling (20,21). Although many may argue of the value of lymphadenectomy with early-stage lung cancer, nodal upstaging may be seen in 15–20% of patients with stage I NSCLC. Moreover, those patients who undergo segmentectomy with mediastinal lymphadenectomy show increased survival compared to those patients with only hilar lymph node sampling (22). Given this data, several authors have sought to investigate whether segmentectomy allows for adequate staging. Mattioli and colleagues performed a single institution study comparing patients undergoing anatomical segmentectomy with lobectomies and found similar number of median lymph nodes dissected in both N1 and N2 stations in the two groups (19). This leads us to believe that adequate lymphadenectomy is feasible during sublobar resections and should be performed whenever possible.

In an effort assess gaps in quality of lymph node evaluation, Osarogiagbon et al. compared surgeons’ reported lymph node examination with samples received by the pathologist (23). The concordance rate between the operating surgeons and pathologist was only 39%, suggesting what is perceived as adequate lymph node evaluation, is many times suboptimal. Over 40% of patients in this study had no mediastinal lymph node sampled (23). The authors concluded that the quality gap was likely due to poor surgical collection, issues with specimen transfer, and poor pathological examination. 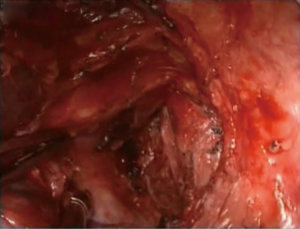 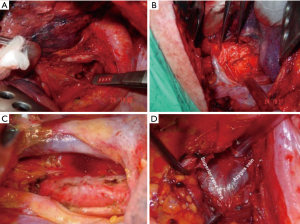 In order to increase prevalence and quality of lymph node assessment in lung cancer resection, Osarogiagbon and colleagues proposed use of a lymph node collection kit intraoperatively (31). This kit consisted of pre-labelled cups for each of the lymph node stations, along with a lymph node map using the IASLC nomenclature (32). In addition, separate kits were available for right and left sided resections, indicating which lymph node stations were mandatory. Use of the collection kit resulted in 73% of the study population having adequate lymph node assessment. Moreover, the concordance rate between surgeon and pathologist regarding lymph node evaluation increased from 39% to 80% (31). In a follow up study, heightened awareness was added as a measure to improve suboptimal lymph node evaluation, and although it did result in increased quality of surgical resection and pathological assessment, use of a specimen collection kit was the most effective tool (33).

The main limitation of this narrative review is the heterogeneity of studies included, with many being retrospective in nature. There also may be an element of selection bias inherent to narrative reviews. Despite these limitations, we believe the information presented provides a good overview of the current status of lymphadenectomy performed during lung resections. Given the varying guidelines and lack of randomized control studies in this area, further research is necessary to decide the optimal extent of lymphadenectomy in lung cancer surgery.

The quality of lymph node dissection depends on the following other factors:

Systematic mediastinal lymph node dissection is recommended in all type of lung cancer surgeries whether it is robotic surgery, VATS, or an open thoracotomy. There should be no difference in each technique as to the number of stations and quantity of lymph nodes examined, in order for lung cancer resection to be considered complete. In patients with T1 tumors, hilar and interlobar nodes need to be evaluated with frozen section studies, this may help decide whether to perform just a sampling from mediastinum in elderly and fragile patients vs. a complete dissection. If this is not possible, and in all patients, we recommend performing systematic mediastinal assessment. The pathologist needs to report and describe the number of lymph nodes removed and analyzed. The number of metastatic lymph nodes in each station, and the integrity of the lymph node capsule should be reported. The quality of lymph node dissection can then be understood from the final pathology report.

Systematic mediastinal lymph node dissection is recommended in all type of surgeries for lung cancer, whether robotic surgery, VATS, or an open thoracotomy. Differences in guidelines may be a source of confusion as to the ideal number of lymph nodes and stations to be resected. Heightened awareness and use of specimen collection kits may increase the quality of lymph node resection. Given the varying recommendations for intrathoracic lymph node assessment, further research is necessary to decide the optimal extent of lymphadenectomy in lung cancer surgery.

Conflicts of Interest: All authors have completed the ICMJE uniform disclosure form (available at https://asj.amegroups.com/article/view/10.21037/asj-21-80/coif). The series “Lymphadenectomy in Thoracoscopic Surgery” was commissioned by the editorial office without any funding or sponsorship. AT serves as an unpaid editorial board member of AME Surgical Journal from December 2020 to November 2022. The authors have no other conflicts of interest to declare.