The International Association for the Study of Lung Cancer (IASLC) definition of complete resection for lung cancer lies in an adequate nodal evaluation, either by systematic lymph node dissection (LND) or lobe-specific LND, and in the integrity of the highest mediastinal node, nodal capsule, and resection margins (1). So far, the optimal way to perform LND in lung cancer surgery remains a subject for study and further data are required to determine its adequate extent, number, and method (2-6). The role of LND in pulmonary metastasectomy is also unclear. However, some positive effects of radical LND in metastasectomy have been reported, such as improved survival in patients with renal cell carcinoma and reduced mediastinal recurrences in patients with colorectal cancer (7). Our objective was to clarify the current status of lymphadenectomy using energy device in thoracic surgery reviewing key questions such as (I) extent of LND, (II) specific characteristics of energy devices, (III) surgical techniques and ways to prevent complications.

We present the following article in accordance with the Narrative Review reporting checklist (available at https://asj.amegroups.com/article/view/10.21037/asj-21-73/rc).

We ran a research in MEDLINE (via PubMed) in July 2021 and dealt with any studies of interest. We included manuscripts focusing on LND or lymphadenectomy in thoracic surgery, including details on usage of energy device if possible.

Extent of LND: the more the better?

The appropriate extent or number of lymph nodes that should be harvested during LND in lung cancer is still debatable and might differ based on the histology, invasiveness, and location of the tumor. So far, an extensive LND would lead to more accurate staging and prediction of survival outcome and potentially better survival (3-6). Prospective studies in terms of survival are ongoing, such as the JCOG1413 randomized phase III trial, comparing lobe-specific LND and systematic LND (8). Previous studies have also analyzed the ideal number of resected lymph nodes. An analysis of the American National Cancer Database reported that lobectomy was associated with a positive survival when four lymph nodes were sampled, concluding that the ideal sampling number was five lymph nodes and that the quality metric of a minimum of 10 lymph nodes was unjustified (9). In contrast, another study in patients with clinical stage I–II radiologically pure-solid non-small-cell lung carcinoma reported the optimal number of 18 lymph nodes and six nodal stations for LND (3). In practice, the extent and accuracy of LND is affected not only by the surgical skills but also the principles of the operating surgeon.

According to IASLC, the integrity of the highest mediastinal node, nodal capsule, and resection margins are important concepts when performing LND (1). Our rationale of LND embeds this concept and considered LND as a process of subtraction of anatomical structures from the mediastinum, resulting in an en bloc resection of lymph node tissues and surrounding adipose tissues (Figures 1,2, Video 1). Therefore, we should not dissect or grasp the lymph nodes themselves but rather identify the surrounding anatomical structures that define the boundaries of lymph node stations. By doing so, the remaining tissues will be lymph nodes enwrapped by the surrounding pleura/membrane and adipose tissues. To achieve this rationale, the use of energy devices is beneficial in various steps of LND due to its specific and multifunctional features. 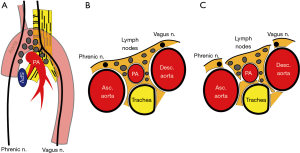 Most energy devices can be used to dissect, coagulate, and resect tissues, leading to less exchange of tools and less surgical time. Different technologies are implemented in energy devices, such as bipolar energy, ultrasound, or a combination of both. In bipolar device, the bipolar electrosurgical radiofrequency energy achieves vessel sealing by denaturing the collagen and elastin structure within the tissues, via a combination of heat and pressure (10,11). In ultrasound devices, electrical energy is converted to mechanical energy by longitudinal vibration. The heat generated by mechanical energy denatures proteins and forms a coagulum. This combination of generated heat and clamping pressure allows sealing of vessels (12). Devices thus have common mechanisms, such as tissue compression, protein denaturation, coagulation, and dissection; they also have unique features to prevent temperature injury or to adjust the energy delivered based on target tissues. The individual strong points and drawbacks for each type of device should be correctly understood prior to use. The common advantages of energy devices are their curved tip that rotates and sealing effects (Figure 3), whereas disadvantages include thermal damage. When using energy devices, there are factors that can be controlled by a surgeon, such as tissue compression, time, and occasionally temperature, whereas some factors are more patient-dependent and less controllable, such as the biological reaction of collagen, elastin, and water. Surgeons should be aware of these factors when using energy devices (Table 1).

Energy devices usually have a curved tip that rotates; thus, they can be used to dissect and grasp. The curved design is often close to Kelly or mosquito clamps, which allows dissection in narrow spaces (Figure 3). Moreover, the sealing effect is a feature specific to energy devices that is not seen in electrocautery. An appropriate sealing of small vessels will theoretically lead to less bleeding or chylothorax. For example, the resection of the pulmonary ligament by energy device when dissecting lower mediastinal lymph nodes #8 and #9 could benefit from this sealing effect and avoid postoperative bleeding. Correctly sealing the bronchial artery when dissecting lymph node #12 along the bronchus is equally important. This sealing function is also effective in areas where the lymphatic drainage converge to systemic circulation, preventing chylothorax.

Surgeons must be aware of the type of vessel (systemic artery, vein, pulmonary vessels, or lymphatic/thoracic duct) and diameter that can be safely sealed when using energy device. Inappropriate use could lead to bleeding or chylous leakage (13,14), thus ligation or clipping should be added if necessary. Preclinical animal models have shown that ultrasonic scalpels are reliable for division of porcine pulmonary vessels 4 mm and smaller (12). Another animal study using bipolar sealing device concluded that it could safely seal pulmonary vessels smaller or equal to 7 mm in diameter (15). Importantly, a prospective study reported that bipolar energy device during lung surgery could securely seal pulmonary arteries as large as 5 mm in diameter and pulmonary veins as large as 7 mm without additional reinforcement (13). Regarding lymphatic vessels, data are scarce. Porcine thoracic duct could be safely sealed with ultrasonic device, although data on the diameter were not specified (16). In a study reporting the use of ultrasonic device during LND of the neck, chylous leakage was intraoperatively suspected after sealing of the lymphatic duct and thoracic duct with energy device alone in 28% of cases, for which additional ligation was performed (14). In another study comparing bipolar device with hand ligation during pulmonary lobectomy (n=44 vs. 53, respectively), the bipolar device group had no cases of chylothorax, whereas the hand ligation group reported 1 case (17). Also, based on the principle that dissection of tissue with energy device allows sealing of fine and invisible lymph ducts, a decreased amount of chest tube drainage can be considered as one surrogate marker of adequate lymphatic sealing. From that viewpoint, many studies have reported a decrease in amount of chest tube fluid when using energy devices (17).

Although energy devices are designed to avoid thermal damage, heat injury still remains an issue. There are several types of heat related to energy devices: heat of the device itself, lateral heat that spreads from the blade, and heat related to mist/steam (Figure 4). Surgeons should consider these types of heat when handling energy devices close to delicate or vulnerable tissues. Moreover, keeping the surgical field dry is important to prevent unintended mist or steam created from energy devices. The heat of the energy device itself should be considered especially when it has a bare blade (also called as active blade). To protect the surrounding tissues from heat injury, a space between the tip, underlying tissues, and lateral tissues should be created by applying slight traction to the tissue by lifting or rotating the blade. An unintended application of high temperatures that creates irreversible protein denaturation should be avoided, especially in areas close to nerves and vessels. A major pitfall is the recurrent nerve when dissecting around the brachiocephalic artery for right upper LND. Interestingly, a study on open thyroidectomy cases reported that injury to the recurrent nerve did not occur when energy devices were used at ≥2 mm from the nerve (18). In a study comparing ultrasonic device (n=29) and conventional hand ligation (n=30) in neck dissection, there were no cases of neural damage to hypoglossal, lingual, and phrenic nerve in either group (14). So far, studies focused on nerve injuries with energy device during thoracic surgery are limited. Although not much data are available, some surgeons have reported decrease in recurrent nerve injury after the implementation of energy devices (19). 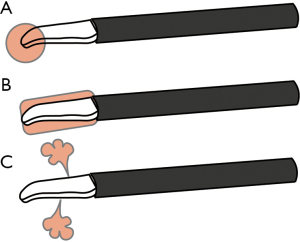 Figure 4 Types of heat generated by energy devices. Heat generated from the tip (A), laterally (B), and as mist or steam (C).

Dissection and recognition of anatomical structures

The basic concept in preventing unintended injury to structures is to correctly dissect, confirm, and be aware of the anatomical structures prior to resection. The structures surrounding or defining the boundaries of each lymph node station should be constantly confirmed during LND (Table 2). A useful way is to encircle key structures with tapes, such as the vagus nerve, phrenic nerve, azygos vein, etc. This allows better recognition of the main stem and ramifications of nerves and vessels. Indirect traction can also be applied to the encircled structures by grasping the encircling tape, which leads to an easier dissection. We should also be familiar with the tissues that create the boundaries of lymph node stations (Table 2, Figures 1,2). The tissues that are beyond what we see should also be kept in mind, such as the ipsilateral left recurrent nerve when performing right upper mediastinal LND or the ipsilateral main bronchus when performing lower mediastinal LND. We should be aware of key dissection areas that could lead to chylothorax of bleeding. The thoracic duct, especially its branches, is difficult to recognize intraoperatively, so these should be taken care of and correctly sealed.

The use of energy devices during LND is theoretically beneficial because of their sealing effect, curved rotating tip, and ability to decrease complications, such as bleeding, chylothorax, and damage to nerves. However, these benefits are mostly theoretical, and the superiority of energy devices over conventional electrocautery is sometimes modest (20). A correct understanding of energy device-related features and anatomical structures is essential for its effective use and prevention of unexpected injuries. Although the use of energy device in thoracic surgery has crossed a tipping point and has been extensively implemented, further concrete evidence comparing the benefits of energy devices are awaited.

The authors thank Enago (www.enago.jp) for the English language review.

Funding: This work was partly supported by KAKENHI Grant-in-Aid for Young Scientists (grant number 19K18203) Japan Society for the Promotion of Science.

Conflicts of Interest: All authors have completed the ICMJE uniform disclosure form (available at https://asj.amegroups.com/article/view/10.21037/asj-21-73/coif). The series “Lymphadenectomy in Thoracoscopic Surgery” was commissioned by the editorial office without any funding or sponsorship. The authors have no other conflicts of interest to declare.