“Radical lobectomy,” proposed by Cahan in 1960, emphasizes the importance of systematic dissection of the regional lymph nodes and is a procedure that is distinct from simple lobectomy (1). The regional lymph nodes refer to the interlobar, hilar, and mediastinal lymph nodes to which cancer cells could spread from the primary tumor; “lymphadenectomy” or “lymph node dissection” refers to the procedure in which these lymph nodes are removed en bloc (2). Therefore, lymphadenectomy is an important therapeutic component in lung cancer surgery. However, there is still no consensus on the role and technique of lymphadenectomy. Even major societies of thoracic surgery and oncology have proposed different strategies, advice, and guidelines on this issue (2,3).

Since the 1990s, video-assisted thoracoscopic surgery (VATS) lobectomy has become increasingly prevalent and is now a standard surgical approach instead of open thoracotomy (4). VATS has a better cosmetic appearance and faster postoperative recovery than open thoracotomy surgery (5). However, there is insufficient evidence regarding the oncological outcomes, especially for lymphadenectomy, for which it is often reported to be inferior to open thoracic surgery (6-8).

This review article outlines the results and the actual technique of lymphadenectomy by VATS, with a particular focus on the multiportal approach. We present the following article in accordance with the Narrative Review reporting checklist (available at https://asj.amegroups.com/article/view/10.21037/asj-21-62/rc).

The latest relevant literature was searched in PubMed using the keywords: “lymphadenectomy,” “lung cancer,” and “VATS.” The relevant studies in English were identified, screened, and reviewed by all the authors. Unpublished materials, congress abstracts, and proceedings were not selected. The authors are responsible for all aspects of the work to ensure that any questions relating to the accuracy or completeness of any part of the work are properly investigated and resolved.

*, only for ND2a-2. ESTS, the European Society of Thoracic Surgeons.

According to the International Association for the Study of Lung Cancer (IASLC) staging manual in thoracic oncology, the assessment of six nodes/nodal stations is recommended for proper nodal staging. Moreover, these should include three nodes/stations from the mediastinum, one of which should be subcarinal node #7 and three nodes/stations from the hilum or other N1 locations (11). Therefore, systematic lymphadenectomy is considered the international standard. However, in recent North American clinical practice, it has been reported that in 83% of cases in which systematic lymphadenectomy was performed, the quality was equivalent to lymph node sampling. With the improvement of radiological technology, the trend is shifting from the era of uniform systematic lymphadenectomy to the era of selective lymphadenectomy according to each case. In Japan, a randomized phase III trial of lobe-specific vs. systematic lymphadenectomy for clinical stage I–II non-small cell lung cancer [Japan Clinical Oncology Group (JCOG) 1413] is currently ongoing (12). It will be interesting to determine if the scientific validity of selective lymph node dissection can be proven.

Lymphadenectomy plays an important role in the surgical treatment of lung cancer and is a cornerstone in assessing the stage and prognosis of this disease. The expected purpose of this procedure is as follows: (I) an accurate evaluation of the presence or absence of lymph node metastasis, which is beneficial for predicting the prognosis and for the indication of postoperative adjuvant therapy (staging effect), and (II) an improved prognosis by complete resection of metastatic lymph nodes (prognosis improvement effect) (2).

Theoretically, an improved prognosis can be expected when there are lymph node metastases, and the metastases are confined to the dissected lymph nodes with little possibility of systemic dissemination (e.g., pN1, single pN2). Moreover, in the absence of lymph node metastasis (pN0), dissection is the same as resection of a cancer-free area, and there is no prognostic effect of dissection.

In the ACOSOG Z0030 trial, the median survival time in the lymph node sampling group was 8.1 years, compared with 8.5 years in the lymphadenectomy group (the median follow-up time was 6.5 years) (13). The lack of confirmatory evidence for a favorable effect of lymphadenectomy may be due to the following: (I) there was extensive systemic sampling in this study, (II) the majority of lung cancer surgery cases were pN0 cases, and (III) adjuvant chemotherapy was not standardized at the time of conducting this trial. However, scientific validation did not show that lymphadenectomy improved the prognosis.

Thus, although lymphadenectomy is considered the international standard, the established scientific evidence is in terms of staging efficacy, and its therapeutic significance has not been clarified.

Comparison with other minimally invasive approaches

A novel, minimally invasive approach, observed in robotic and uniportal surgeries, can assess an equal number of lymph nodes compared with open thoracotomy (21,22). In addition, it has been reported that these approaches can remove more lymph nodes than multiportal VATS (21). Although both approaches are promising, there are few reports on the long-term oncological outcome, and there may be a bias in the surgical techniques among institutions; therefore, future studies are essential.

In this section, we have described the procedure of lymphadenectomy via multiportal VATS followed at our institute (23,24).

The procedure of lymphadenectomy requires the understanding of certain important principles, which are as follows, (I) ensuring a good surgical field and not performing surgery with poor vision, (II) achievement of anatomical landmarks, (III) avoiding direct grasping of lymph nodes, and (IV) ligation or clipping of the dissection edge.

At our institution, thoracoscopic lobectomy with systematic lymphadenectomy is performed via multiport (four ports: 7, 7, 15, and 30 mm) while routinely confronting an upside-down monitor setting (Figure 2). Two monitors are set up on the cranial side of the patient, and the monitor for the assistants is placed upside down. The surgeon stands on the right side of the patient, and the thoracoscopic assistant and secondary assistant stand on the left side of the patient in all cases. During the operation, the secondary assistant provides the surgeon with a better view of the surgical site by placing two instruments using a 15 mm incision. The thoracoscopic assistant places a 7 mm port and can visualize all the structures in the chest cavity with a 5 mm 30° rigid thoracoscope. For the surgeon, a 30 mm utility incision is made, and a 7 mm port is inserted for the surgeon’s left hand. In this setting, the surgeon can freely use both hands and perform sharp dissection using scissors. 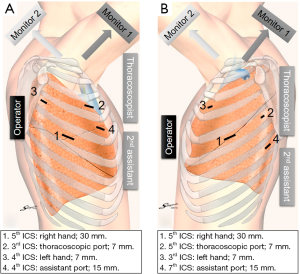 In the case of right upper lobectomy, a 30 mm utility incision for the surgeon’s right hand is made on the posterior axillary line in the 5th-intercostal space (ICS). A 15 mm incision for the secondary assistant is made on the anterior axillary line in the 4th-ICS. Two 7 mm ports are placed: one in the 3rd-ICS for the thoracoscope and one in the 3rd-ICS for the surgeon’s left hand (Figure 2A). In the case of right middle or lower lobectomy, each port uses one ICS below.

For left upper lobectomy, a 30 mm utility incision for the surgeon’s right hand is made in the 5th-ICS. A 15 mm incision for the secondary assistant is made in the 7th-ICS. Two 7 mm ports are placed: one in the 5th-ICS for the thoracoscope and one in the 3rd-ICS for the surgeon’s left hand (Figure 2B). For left lower lobectomy, each port will be placed one ICS below as on the right side.

The secondary assistant retracts the lung anteriorly. The mediastinal pleura of the dorsal side is incised just in front of the aorta, and the bronchial arteries, directly branching from the aorta, are divided with a surgical energy device. The left main bronchus is dissected cranially using scissors. The vagus nerve is exposed, and the left recurrent laryngeal nerve is dissected distally. Dissection of the posterior area of the nodal packet, including the #4L lymph nodes and surrounding structures, such as the left main bronchus, aortic arch, vagus nerve, and left recurrent laryngeal nerve, is completed before approaching the hilar structures. The #4L lymphadenectomy is straightforward because the left recurrent laryngeal nerve has already been dissected, and only the anterior area of the #4L remains to be dissected (Video 4).

We reviewed 1,398 lung cancer patients who underwent radical lobectomy or more extensive pulmonary resection with mediastinal lymphadenectomy between 2010 and 2020 at our institute. Major postoperative complications related to lymphadenectomy were as follows: chylothorax in five, transient recurrent laryngeal nerve paralysis in 11, and bronchopleural fistula in four patients; morbidity rate of 1.4%. The results were considered to be acceptable.

The goal of oncologic surgery is to ensure the longest possible survival rate. All these techniques have been extensively studied in terms of long-term oncologic outcomes, including overall survival, disease-free survival, and recurrence rates. Future discussions of the “perfect lymphadenectomy” are required to focus more on other issues that have been discussed, such as the number of lymph nodes to be harvested, the most appropriate sites for analysis depending on the type of surgery and the location of the disease, and less on the comparison of the efficiency of different surgical approaches.

The authors sincerely thank Dr. Ken Nakagawa and Dr. Sakae Okumura for imparting their knowledge regarding the techniques of performing precise lymphadenectomy. The authors would also like to thank Editage (www.editage.com) for English language editing.

Conflicts of Interest: All authors have completed the ICMJE uniform disclosure form (available at https://asj.amegroups.com/article/view/10.21037/asj-21-62/coif). The series “Lymphadenectomy in Thoracoscopic Surgery” was commissioned by the editorial office without any funding or sponsorship. The authors have no other conflicts of interest to declare.